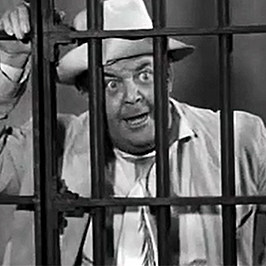 You don't know Hal Smith. A rather common name, probably dozens or hundreds of Hal Smith's in the country. Oh, but you knew this Hal Smith. And you loved him.

Except you knew him as Otis Campbell and he was the town drunk in Mayberry on 'The Andy Griffith Show'.

For you younger folks, let me say this: Back in what you'd call the 'olden days', say 50-60 years ago, it was OK to laugh at someone so drunk they could barely stand up. I know, I know, not anymore and I'm not saying it was right that we did, but....well, we did. And we loved him.

And of course, when Otis and Barney would get together (they often had scene's together, but were so good, it never seemed to be often enough), well that was what I would call television comedy gold.

Otis wasn't in every episode, of course. Otis Campbell was a little like ice cream: Absolutely great to have, but you couldn't have too much or you'd get a headache!

So who was this guy that played Otis to absolute comic perfection?

But did you know Hal was also a prolific voice actor?

Yep, you heard 'Otis' on such cartoon classic as Quick Draw McGraw, Huckleberry Hound, the Flintstones, as well as dozens of other Disney and Warner Brothers cartoons.

Hal Smith, you see, was a professional. And if you look close enough, through your laughter, you'll see that professionalism on the Andy Griffith Show, too.

Hal Smith died of a heart attack in 1994 at the age of 77. But thanks to the magic of re-runs, we'll continue to have the antic's of one of Mayberry's favorite residents, the town drunk, Otis Campbell.

Enter your number to get our free mobile app
Filed Under: Andy Griffith Show, otis campbell, Whatever Happened To
Categories: Articles
Comments
Leave A Comment
Back To Top
Jerry-O-Key